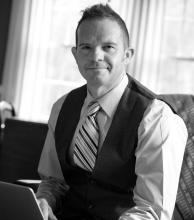 Dr. Corey W. Johnson is a Professor in the Department of Recreation and Leisure Studies at the University of Waterloo. He teaches courses on inclusive recreation, social justice, gender and sexuality, qualitative research methods, and the philosophy of science.

Dr. Johnson’s theorizing and qualitative inquiry focuses its attention on the power relations between dominant (white, male, heterosexual, etc.) and non-dominant populations in the cultural contexts of leisure.

This examination provides important insight into both the privileging and discriminatory practices that occur in contemporary leisure settings.

He sees this research as complimentary to both his classroom instruction and his professional service, and he uses advocacy, activism, civic-engagement, service-learning and community partnerships to create unique learning opportunities for individuals and institutions.

This synergy is particularly relevant as it increases the quality, level, and number of services offered in a given community. In 2016 he was awarded the Academy of Leisure Science Excellence in Teaching Award.

His research has been published in journals like the Journal of Leisure Research, Leisure Sciences, The Journal of Homosexuality and the International Journal of Qualitative Studies in Education just to name a few.

He has written the seminal text Fostering Social Justice through Qualitative Research: A methodological guide and is currently writing Learning from and with “Others”: Collective Memory Work and co-editing Digital Dilemmas: Transforming gender identities and power relations in everyday lives.

He has received substantial financial support in his efforts to create safer environments for lesbian, gay, bisexual and transgender youth in institutional settings such as camps, secondary schools, universities and detention centers.

He was selected as one of the top ten educators (P-16) in Georgia working for equality by the Georgia LGBT Pride Committee and in 2012 he received the UGA President’s MLK Jr. Achieving the Dream award for his efforts.

Dr. Johnson is also committed to service. He is currently the co-editor of Leisure Sciences and has previously served as the co-editor for Schole: A Journal for Park and Recreation Education.

He also served on the Board of Directors for the Society of Park and Recreation Educators (SPRE) from 2005-2008 and as president of the organization in 2010-2011. In 2014 he was inducted as a fellow into the Academy of Leisure Sciences.

On the University of Waterloo campus he serves on the advisory board of the Status of Women and Equity (SWEC), chairs the Gender and Sexual Diversity Working Group (GSDWG), and is the Applied Health Science HeForShe Faculty Advocate.

Attempting to practice what he preaches, his own leisure includes Bikram yoga, horseback riding, backpacking, camping, cooking, traveling abroad with his husband Yancey, and spending time with his Frenchie Sedgwick.